Anderton Gables have been appointed as Employer’s Agent, Consultants and Principal Designer acting for both parties on the newly formed joint venture between Trafford Housing Trust and Laurus Living Space LLP for the proposed redevelopment of the Former Bayer Site in West Timperley, Altrincham. 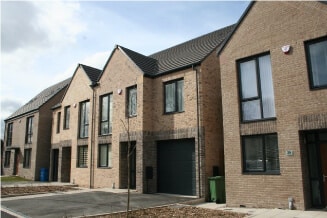 The proposed scheme involves the redevelopment of the former Bayer Site with the creation of 62 new dwellings, split between 33 high quality family homes and 29 apartments together with external areas, hardstanding, roads and parking.

The development includes the formation of a new site entrance of Etchells Road via a new crossing over the adjacent Timperley Brook.

With the scheme being on a Brownfield Site, the following works needed to be u ndertaken: – Flood Mitigation with approval from Environmental Agency (EA), Section 102 Works – Installation of Utilities, Ecology Considerations – Relocation of Slow Worm, Invasive Species and Knotweed and Himalayan Balsam Treatments.

The tender was negotiated directly with Wates Construction through their ‘Living Space’ division and the scheme will be marketed under the Laurus Homes brand and will be called “Stonebrook”.

Download Case Study
LANCASHIRE
Thomas Carter House, 1&2 Cross Street, Preston, PR1 3LT
E: preston@andertongables.co.uk
T: 01772 562800
GREATER MANCHESTER
Imperial Court, 2 Exchange Quay, Salford Quays, Manchester, M5 3EB
E: manchester@andertongables.co.uk
T: 0161 696 3119
YORKSHIRE
7th Floor, The Balance,
2 Pinfold Street, Sheffield, S1 2GU
E: sheffield@andertongables.co.uk
T: 0114 478 5833
QUICK NAV
TWITTER
AG
@AndertonGables
Neighbourly Matters is a specialist area of Surveying practice involving the resolution of disputes (or avoidance o… https://t.co/waQPCNeiOa
Last Friday Club are very excited to announce the launch of it's very own website. We have a dedicated news and blo… https://t.co/XuHhvCbH1d
#wednesdaywisdom A Core Values that Team AG live by is ‘Communication’ – Here is our Senior Building Surveyor Su Se… https://t.co/7z9pyyciTH
Meet Tom Hargreaves- Tom is a Director here at AG and heads up with Projects team. https://t.co/1U57Ff0qLk
RT @Anita_Chan_: Delighted @BowkerSadler ‘s #WhiteLionPub has picked up 2 #LABC awards for Best Change of Use of an Existing Building & Bes…
This months #LastFridayClub is sponsored by @NapthensOnline and @etcurban Come and join us at @FORUMpreston 28th F… https://t.co/8uNYl4BL5E
RT @CaseyCompanies: We are up for an award! The beautiful White Lion has been shortlisted in 2 categories at the LABC North West Building E…
#AGFacts Did you know that you can obtain a court order to access neighbouring land. https://t.co/zg8Qecqh5P
Not long until #MIPIM. Looking forward to seeing some familiar faces and making new contacts #Alloverthenorth… https://t.co/BX8rsQmBOn
We are excited to be exhibiting at #NWAPPEXPO2020 10th of March https://t.co/b749wiSJl8

© All Rights Reserved Anderton Gables Limited 2019
We use cookies to ensure that we give you the best experience on our website. If you continue to use this site we will assume that you are happy with it.OkRead more